The agreement was signed in Sakamkam area, where the first passenger train station will be built in the heart of Fujairah city

Each train will have a seating capacity of more than 400 passengers, and will run up to 200 km/h

His Highness Sheikh Theyab bin Mohamed bin Zayed Al Nahyan, Chairman of Abu Dhabi Crown Prince’s Court and Chairman of Etihad Rail, visited the final package of Stage Two of the UAE National Rail Network, which extends for 145 kilometres from Sharjah to Fujairah Port and Ras Al Khaimah, to review the progress of rail construction works in these emirates.

During the visit, which started in Al Suyoh area in Sharjah and concluded in Sakamkam, His Highness inspected key landmarks on the project’s route in the final package of Stage Two of the network; starting with the rail bridge in Al Suyoh area in Sharjah, followed by a stop in Al Bithnah area in Fujairah to visit Al Bithnah bridge, then HH headed to visit a number of tunnels where he witnessed tracklaying works across the tunnels in Al Hajar Mountains in Fujairah.

His Highness reaffirmed the continuous support and guidance of His Highness Sheikh Mohammed bin Zayed Al Nahyah, President of the UAE, for Etihad Rail’s ambitious national project throughout the past years. Today, Etihad Rail is continuing its commitment to achieving more successes, building upon the foundations established by the UAE’s wise leadership for developing the transport system and achieving economic prosperity, through the development of the UAE National Rail Network. Etihad Rail is enhancing its contribution to the UAE’s development, through shaping the rail industry and setting business models and client behaviours. The company has made consecutive achievements, which reflect the project’s role in shaping the future of the transport sector, in line with the UAE’s journey of excellence.

Following the inspection tour, in his next stop, His Highness Sheikh Theyab witnessed another significant achievement in the development of the UAE National Rail Network. Accompanied by His Excellency Suhail Mohamed Faraj Al Mazrouei, Minister of Energy and Infrastructure, His Highness witnessed the signing of an agreement between Etihad Rail and Spain’s CAF company, one of the world leaders in the railway sector, for designing, manufacturing, supplying, and maintaining passenger trains for the Etihad Rail project valued at 1.2 Billion AED.

His Highness lauded the agreement, which serves as a major step forward in the development of the UAE’s passenger transport services, in line with company’s commitment to completing the national and strategic project on schedule, and according to the best criteria and practices.

The agreement, which emerged as a result of Etihad Rail’s success at the Middle East Rail 2022, was signed by His Excellency Shadi Malak, Chief Executive Officer of Etihad Rail, and Josu Imaz, Chief Executive Officer Rolling Stock of CAF, in the presence of His Excellency Mr. Iñigo de Palacio Barthe, Ambassador of Spain to the UAE, and officials from both sides. The agreement was signed in Sakamkam area, where the first passenger train station will be built in the heart of Fujairah city.

Under the terms of the agreement, CAF will design, manufacture, supply, and provide maintenance for passenger trains as per the European standards. Each train will have a seating capacity of over 400 passengers, and will run up to 200 km/h. The trains, which will offer a variety of seating segments, will serve as a major addition to the public transport system in the UAE.

The development of the passenger railway services, one of the three strategic projects of the National Railways Programme, seeks to enhance the public transportation system in the UAE and improve living standards of the UAE’s citizens and residents, while adhering to the best international security and safety standards. The passenger trains will facilitate transport across the cities of the UAE, providing passengers with a quick, efficient, safe, comfortable, and cost-saving travel experience.

Through its partnership with CAF, a global leader in the railway industry, Etihad Rail will benefit from CAF’s long-standing experience for more than 100 years, in providing advanced solutions for improving the rail commuter’s experience and providing passengers with high levels of safety, efficiency and quality.

The passenger trains will be equipped with the latest cutting-edge technologies that suit the topography and climate of the UAE, which is key for ensuring high performance, efficiency, and reliability. The trains will provide various amenities, entertainment, and comfortable seating at high levels of security, efficiency, and quality, allowing passengers to enjoy exceptional journeys. The trains will be equipped with modern amenities, including infotainment systems, charging stations, and more, along with food and beverages, and ample legroom, in addition to an advanced air-conditioning system, to meet the needs of all citizens, residents, and visitors. There will also be different seating segments, including first class, business-class, and economy.

Bringing in Global Expertise and Knowledge in Passenger Train Services

Etihad Rail has recently signed three MoUs with Spain’s national railway operator Renfe, and the British companies High Speed 1 and GB Railfreight, to enhance cooperation and the exchange of knowledge, expertise, and the best practices in in freight and passenger rail services and rail operations. This took place during Middle East Rail 2022, which was hosted by the Etihad rail in May.

The National Rail Network’s route in the final package of Stage Two extends for 145 kilometres, connecting the borders of Dubai and Sharjah, going through Fujairah all the way to Ras Al Khaimah. It comprises 54 bridges and 20 wildlife crossing points. It also has 9 tunnels which extend for 6.9 kilometres through Al Hajar Mountains, including the largest heavy freight railway tunnel in the Arab Gulf which runs for 1.8 kilometres. The route is known for its distinct geographic location, being surrounded by mountains on all sides.

In November 2021, Etihad Rail completed the excavation works for all rail tunnels in this route, two months ahead of schedule and in compliance with the highest safety and sustainability standards. This was achieved using the latest tunnelling equipment and the best modern technology, adding a notch to the project’s records in terms of safety.

The National Railway Network supports the growth of the national economy with sustainable transportation system, which provides safety and efficiency. The network’s locomotives incorporate the latest technology for reducing emissions, where carbon emissions will be reduced by 70-80% compared to the amount emitted by trucks, with one single train journey replacing around 300 trucks on the road.

Etihad Rail employs the best global practices, and constantly conducts environmental impact assessments (EIAs) to limit the impact of the UAE National Rail Network on the environment during planning, construction, and operations. 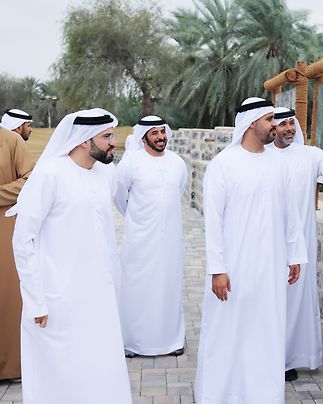 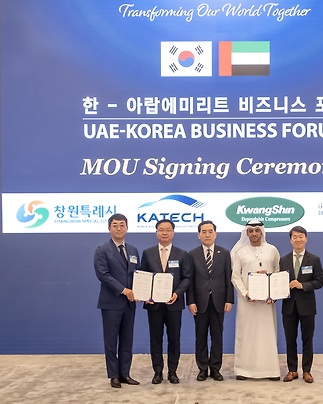 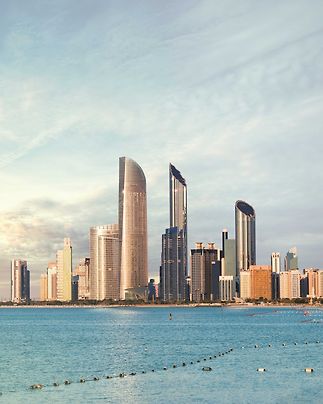