As the Environment Agency – Abu Dhabi (EAD) continues to be at the forefront of nature conservation by consolidating strong relations with international organisations, today, the Agency announced that Her Excellency Dr Shaikha Salem Al Dhaheri won at the International Union for the Conservation of Nature (IUCN) elections.

Her Excellency Dr Shaikha was re-elected as Regional Councillor for West Asia for the second time, after a similar victory in 2016. She was voted in during the World Conservation Congress which was held in Marseilles, France from 3rd to 11th September 2021. Therefore, she will be among the members of the new Council of the Federation for the period from 2021-2024. Her Excellency Dr Shaikha is also the only female candidate from the region and one of the only 6 female candidates from the 28 elected global councillors.

As a member of the Council, in her second term Her Excellency Dr Shaikha, will serve the global interests of IUCN. As a Councillor, she has a very important role in the governance of the Union and will help provide guidance and support on the overall development and implementation of the IUCN’s worldwide policies and programmes over the next four years. She will also act as an ambassador in the region to promote IUCN programmes within the region.

“Dr Shaikha’s strong commitment during her first term as Regional Councillor from West Asia in IUCN are what led to her being voted in again for a second term. Her passion for the conservation of the environment and her strong desire to work beyond the borders of the UAE are what make her an excellent choice for this role again. Because of her efforts, Abu Dhabi now has a solid place on the global map and is always a leader in sustainability and the preservation of the environment which is the new international language that everyone aspires to. I wish her luck in her second term and I am certain she will make the UAE proud as always,” said His Excellency Mohamed Al Bowardi, UAE Minister of State for Defence Affairs and Vice-Chairman of EAD.

Her Excellency Dr Shaikha said: “I am grateful to all the members of IUCN for choosing me for another term as the Regional Councillor from West Asia. I am committed to continue serving the UAE and the region to enhance efforts to conserve natural resources. Encouragement and support from our wise leadership in the UAE, IUCN National Committee of the UAE and at EAD were a major factor in the success of my efforts to work outside the borders of the United Arab Emirates and beyond."

She added "As the Global Councillor at IUCN during my first term, I worked to create a strong and proactive regional network, which is not only responsive to challenges but that implements the IUCN’s programme and takes bold new initiatives in line with its mission and policy.”

I have continued to strengthen IUCN in the UAE by establishing the UAE IUCN National Committee and played a key role in the Ministry of Climate Change and Environment efforts to becoming the new State Member and Mohamed Bin Zayed Conservation Fund becoming the new NGO member, said HE Dr Shaikha Salem Al Dhaheri. The total number of IUCN members in the UAE is six, at the moment and more are likely to join in the near future.

“I will continue my work to further strengthen IUCN and make our planet a safer place. My vision for IUCN is for a healthier planet and healthier humanity. This is especially the case in light of the current pandemic, which has opened our eyes to the fact that we need to strengthen our resolve towards making the world a much healthier and sustainable place,” said Her Excellency Al Dhaheri.

During her tenure as Regional Councillor for West Asia for the first term, Her Excellency helped revive the West Asia Regional Committee of the IUCN and organised first regional biodiversity forum for the West Asia region in Abu Dhabi, attended by more than 130 participants from 11 countries representing 77 environmental organisations. One of the key outcomes of the forum was progress made towards the implementation of the IUCN programme for the period 2016-2020.

The forum also contributed to strengthening the possible aspects of cooperation between the conventions related to the protection of biodiversity, in particular the Thirteenth Conference of the Contracting Parties to the Ramsar Convention (Ramsar COP 13), held in the UAE in October 2018, and the Fourteenth Conference of the Parties to the Convention on Biological Diversity (CBD COP 14), which was hosted by Egypt in November of the same year.

Her Excellency has also played key role in her capacity as the Councillor in reviewing the IUCN Statutes and played a pivotal role as a key member of the Governance and Constituency Committee (GCC) for the appointment of the Director General of the Union.

EAD’s relationship with IUCN began in 2000 as an IUCN Framework Partner. In addition, EAD has supported the work of the Species Survival Commission and has hosted the Reintroduction Specialist Group Chair for the 16 years. In 2013, EAD became an official IUCN member.

IUCN is a democratic union that brings together the world’s most influential organisations and top experts, in a combined effort to conserve nature and accelerate the transition to sustainable development. IUCN is a membership union composed of both government and civil society organisations. It harnesses the experience, resources and reach of its more than 1,400 member organisations and the input of more than 18,000 experts.  This diversity and vast expertise make IUCN the global authority on the status of the natural world and the measures needed to safeguard it.

Shaikha Salem Al Dhaheri has been the Secretary General of the Environment Agency - Abu Dhabi (EAD) since 2019.The largest environmental regulator in the Middle East, she is responsible for protecting and preserving our natural resources and promoting sustainable development in the emirate.

She began her career at EAD as a Researcher Assistant in the Agency’s Terrestrial Environment Research Centre in 2000 and was later appointed as Executive Director of the Terrestrial and Marine Biodiversity Sector in 2012. In this role, she spearheaded initiatives to promote a comprehensive understanding of the environment and state of biodiversity in Abu Dhabi and ensured that the sector’s goals were in line with the Abu Dhabi Environment Vision 2030 and the Abu Dhabi Plan, among other national and emirate-level directives.

She has played a defining role in establishing a clear vision for the sector to facilitate sustainable development for Abu Dhabi. Shaikha has been credited with introducing innovative ideas and solutions to the field of environmental protection and species conservation and has overseen the implementation of numerous programs on biodiversity, protected areas, threatened species and fisheries, including national and global species reintroduction programmes which contributed to strengthening the global environmental role of UAE and the Emirate of Abu Dhabi. She serves on several committees and councils in the UAE. She is a board member of Abu Dhabi Sewerage Services Company, sits on the Board of Directors Al Ain Wildlife Park and Resort, Emirates Nature-WWF, the Abu Dhabi Agriculture and Food Safety Authority, the Advanced Technology Research Council, and the International Fund for Houbara Conservation.

Shaikha holds a PhD degree in Wildlife Conservation and Protection from the University of Aberdeen in the United Kingdom, the first Emirati woman to do so. She also holds two master's degrees, one in the Biological Conservation from the University of Kent in the United Kingdom and another in Environmental Science from UAE University (UAEU) in Al Ain. She earned her bachelor's degree in Environmental Science from UAEU. 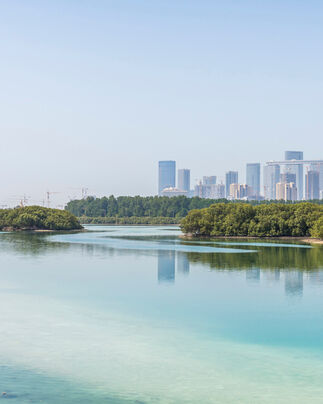 The first environmental organization in the MENA to receive the prestigious global award,