Under the directives of President His Highness Sheikh Mohamed bin Zayed Al Nahyan, Sheikh Nahyan bin Mubarak Al Nahyan, Minister of Tolerance and Coexistence, today inaugurated the Salem BinHam Cultural Centre in Al Ain.
The opening ceremony was attended by Sheikh Musallam Salem bin Ham Al Ameri, Member of the Advisory Council of the Emirate of Abu Dhabi, Chairman of the Board of Directors of the Salem BinHam Cultural Centre, in addition to a number of dignitaries and those interested in the field.

The ceremony began with the national anthem, followed by an introductory video of the centre’s objectives and divisions, after which the attendees took an introductory tour around the centre, where they viewed the halls equipped with the latest technologies to host various types of cultural and community events. The tour was concluded by a visit to the centre's national library, which contains more than 10,000 books on the heritage and culture of the UAE, in addition to the heritage of the Arab region.

The centre has a number of halls equipped with the latest audio, video and lighting equipment to host conferences and private and public celebrations, in addition to a special hall for the collections of the late Sheikh Salem bin Ham, and a library that includes selections from the most prominent historical, heritage and cultural publications, both Arab and international.

It also has a number of halls, including the Sheikh Salem bin Ham private hall intended to host seminars and lectures, and the Al Ain Hall, which can accommodate more than 2,500 people for organising conferences, exhibitions, cultural and social activities, in addition to an outdoor arena for national concerts that can accommodate over 6,000 people. 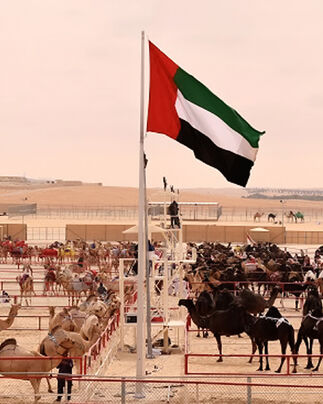