The Department of Culture and Tourism – Abu Dhabi and NBA announce launch of first Jr. NBA league for youth in the UAE

The Jr. NBA Abu Dhabi League, which is part of the league’s global Jr. NBA programme, will feature boys and girls divisions comprised of 20 teams and 10 teams, respectively, and will expand to include additional schools and leagues in future years.  The league is part of a groundbreaking multiyear partnership between the NBA and DCT Abu Dhabi that will see Abu Dhabi host the first-ever preseason NBA games in the Arabian Gulf in October 2022.  The partnership also includes a variety of interactive fan events featuring appearances by current and former NBA players, a series of NBA FIT Clinics promoting health and wellness, and an NBA 2K League exhibition event.

Al Mubarak said: “It’s an honour for Abu Dhabi to host the first Jr. NBA League in the UAE, which will inspire boys and girls across our emirate to take part in this highly popular sport. As someone who grew up loving basketball, I know first-hand how amazing this sport is.  It truly brings communities together, builds teamwork, encourages leadership skills and promotes healthier lifestyles, creating life-long memories along the way which is what Abu Dhabi is all about.  We’re so excited to share our love of basketball with the rest of the world, while working together with the NBA to foster the next generation of sporting talent.”

Rivera said: “It’s great to be back in Abu Dhabi for the launch of the inaugural Jr. NBA Abu Dhabi League, which marks an important milestone in our partnership with DCT Abu Dhabi.  Increasing youth participation for boys and girls is part of our mission to promote the values of teamwork, respect and inclusion while inspiring and connecting the next generation of players and fans through the game of basketball.”

“It was great to get on the court and share my love of the game with the boys and girls participating in the first Jr. NBA Abu Dhabi League,” said Drexler.  “Basketball inspired me to reach for my dreams, and I know this program will do the same for kids in Abu Dhabi.  Who knows, the next NBA legend could be found in this league.”

Drexler, a 15-year NBA veteran who retired from the league in 1998, is an NBA Champion, 10-time NBA All-Star, five-time All-NBA selection, and member of the NBA’s 50th and 75th Anniversary Teams.  He was inducted twice into the Naismith Memorial Basketball Hall of Fame, first in 2004 for his individual career and again in 2010 as a member of the United States Men’s National Basketball Team at the 1992 Olympic Games in Barcelona, Spain.

The Jr. NBA is the league’s global youth basketball programme for boys and girls, teaching the fundamental skills and core values of the game – teamwork, respect, determination and community – at the grassroots level in an effort to help grow and improve the youth basketball experience for players, coaches and parents.  The Jr. NBA Abu Dhabi League aims to promote the NBA and DCT Abu Dhabi’s shared values of leadership, opportunity and inspiration through league games, events and clinics, as well as the goal of encouraging youth to lead healthy lifestyles through active participation in sport.  During the 2021-22 season, the Jr. NBA will reach nearly 37,000 youth in 28 countries in Europe and the Middle East.

The partnership also sees DCT Abu Dhabi, under “Visit Abu Dhabi,” the tourism promotion initiative of the UAE’s capital, serve as the Official Tourism Destination Partner of the NBA in the Middle East, North Africa, Europe and China. 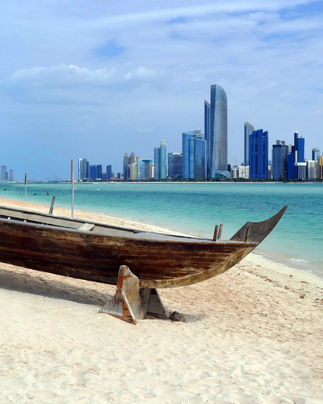