Al Mughirah housing project, which includes 410 residential villas for UAE citizens at a cost of AED1.264 billion, extends over an area of ​​206 hectares (2.06 sq km) and is being implemented by Abu Dhabi Housing Authority in collaboration with the Abu Dhabi Public Services Company, Musanada, in line with the specifications of ‘Emirati Neighbourhood’ project. These projects aim to  establish integrated housing communities that feature heritage design touches reflecting Emirati national identity and heritage.

During the inauguration, His Highness Sheikh Hamdan bin Zayed Al Nahyan received an explanation about the buildings’ specifications and the advantages of their external and internal designs. He was also briefed on the villas’ details using a model.

His Highness affirmed the leadership’s commitment to provide citizens with good living standards and with homes that meet their needs in terms of housing and land, as well as create residential neighbourhoods that are built and implemented by government entities or the private sector and that encourage wellbeing and strong community ties.

His Highness said that Al Mughirah housing project aims to provide an integrated Emirati neighbourhood that meets the needs of Emirati families by providing the best quality and design in line with sustainability requirements. The project has obtained a rating of two pearls, according to Estidama Pearl Rating System.

His Highness Sheikh Hamdan bin Zayed Al Nahyan praised the efforts of the Abu Dhabi Housing Authority and the Abu Dhabi Public Services Company, Musanada, and their partners from the relevant entities in the emirate in implementing the project and in realising the leadership’s directions by providing housing that helps provide social stability and a good quality of life for citizens in Abu Dhabi.

H.E. Falah Mohammad Al Ahbabi, Chairman of the Board of Directors of the ADHA, said: “The completion of Al Mughirah housing project reflects the leadership’s commitment to provide a good standard of living and social stability for UAE citizens. It also reflects the leadership’s directives to provide housing that helps provide social stability and enhances the wellbeing of citizens.

His Excellency indicated that providing suitable housing for UAE citizens is a priority for the leadership, and is in line with Abu Dhabi Housing Authority’s tireless efforts to develop modern, sustainable housing and build a cohesive society that enjoys a good standard of living within a safe, stable environment that stimulates work and wellbeing.

His Excellency affirmed that the authority contributes directly to achieving the goals of the Abu Dhabi Plan in the field of social development by ensuring suitable housing for citizens designed and constructed according to the requirements of the Estidama rating system. Al Mughira housing project provides a pleasant living environment for citizens that meets their needs by combining modern design with features inspired by Emirati culture.

His Excellency praised the cooperation of Musanada and other partners from the relevant entities on the implementation of the housing project, which provides a living environment that offers citizens stability and wellbeing, and reinforces the values of UAE culture for future generations.

Basheer Khalfan Al Mehairbi, Director-General of the Abu Dhabi Housing Authority, said: “Al Mughira housing project is an important project through which the authority seeks to achieve the leadership’s vision to provide a good standard of living for UAE citizens in line with the highest international standards. It also aims to achieve cohesive, diverse and sustainable housing communities for Emirati families, in line with the goals of the Abu Dhabi Plan to provide suitable housing, and with the aspirations of the social sector to provide a good quality of life for every citizen in the emirate.

His Excellency indicated that the project is 99 per cent compliant with the standards of the Residential Communities Guide issued by the Abu Dhabi Housing Authority. The project features 410 villas, with each plot 1,080 sqm, and each villa 543 sqm. Each villa consists of five rooms: a men’s majlis, a women’s majlis, a dining room, two family living rooms, a kitchen, a store room, a laundry room, a housemaids’ room, a driver’s residence, and other facilities. The project also includes four mosques, one prayer complex that accommodates 1,200 worshipers and 3 mosques, each of which can accommodate 350 worshippers - and facilities for 30 shops distributed throughout the project, as well as 13 parks and beach facilities with four public bathrooms. The project will be served by 13 power stations.

His Excellency praised Musanada for its cooperation and tireless efforts to complete the project in a way that achieves the highest quality of housing services in the emirate. He noted that the authority is seeking, with its partners, to develop new services to support UAE families in Abu Dhabi, in line with international standards and the authority’s vision to provide adequate housing for UAE citizens that helps to strengthen family ties and social stability. It is also encouraging the private sector to invest in housing.

The ‘Emirati Neighbourhood’ achieves a balance between modern facilities and traditional design, providing the required privacy in the interior and exterior, and offering a community environment outdoors that encourages a healthy, active lifestyle within covered and open spaces. 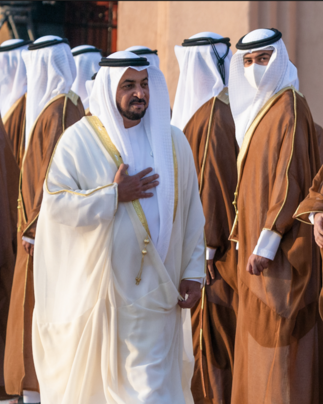 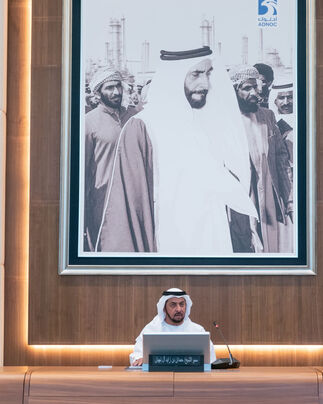 Hamdan bin Zayed has visited the headquarters of ADNOC Group